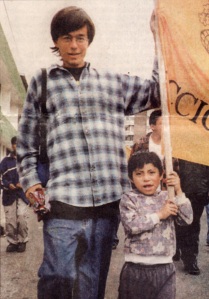 The work and philosophy of the Fund is inspired by the life and character of David  Byrd-Felker. David was a remarkable person; he read well at the age of three. At the age of twenty, he spoke Spanish, German, and Hungarian. He was an ardent fan of Shakespeare and had performed in many plays with the Young Shakespeare Players in Madison, Wisconsin. As a high school student, he spent a year in Hungary and a summer in Ghana. David was a Presidential Scholar at Beloit College, majoring in Spanish and Philosophy. He was one of the founders of Voodoo Barbie, a comedy improv troupe, and a member of Phi Kappa Psi fraternity. During his sophomore year, he spent a semester studying at the Universidad Católica in Quito. During his time there, he worked for the Salesian project Chicos de la Calle, which provides educational opportunities for impoverished students. After completing his semester at the university, David set out to travel in southern Ecuador. He disappeared near the town of Zamora in late July of 2002. Despite an extensive search, no clues have been found as what happened to David.

But David’s spirit lives on in this project —  generous, optimistic, and resilient.

For more about David’s story,  you can read four newspaper stories from the time of David’s disappearance. These appeared in the Milwaukee Journal Sentinel in September of 2002. They are written by Crocker Stephenson, a journalist, who was a friend of David’s and is a friend of the Byrd-Felker family. He accompanied Maggie during her search for David. The fourth story was written in May, 2003, after a memorial service for David in Madison, Wisconsin. They appear on this website under David’s Story, parts 1 – 4.

At the time of the tenth anniversary of David’s disappearance, other stories were written about David and David’s Educational Opportunity Fund.